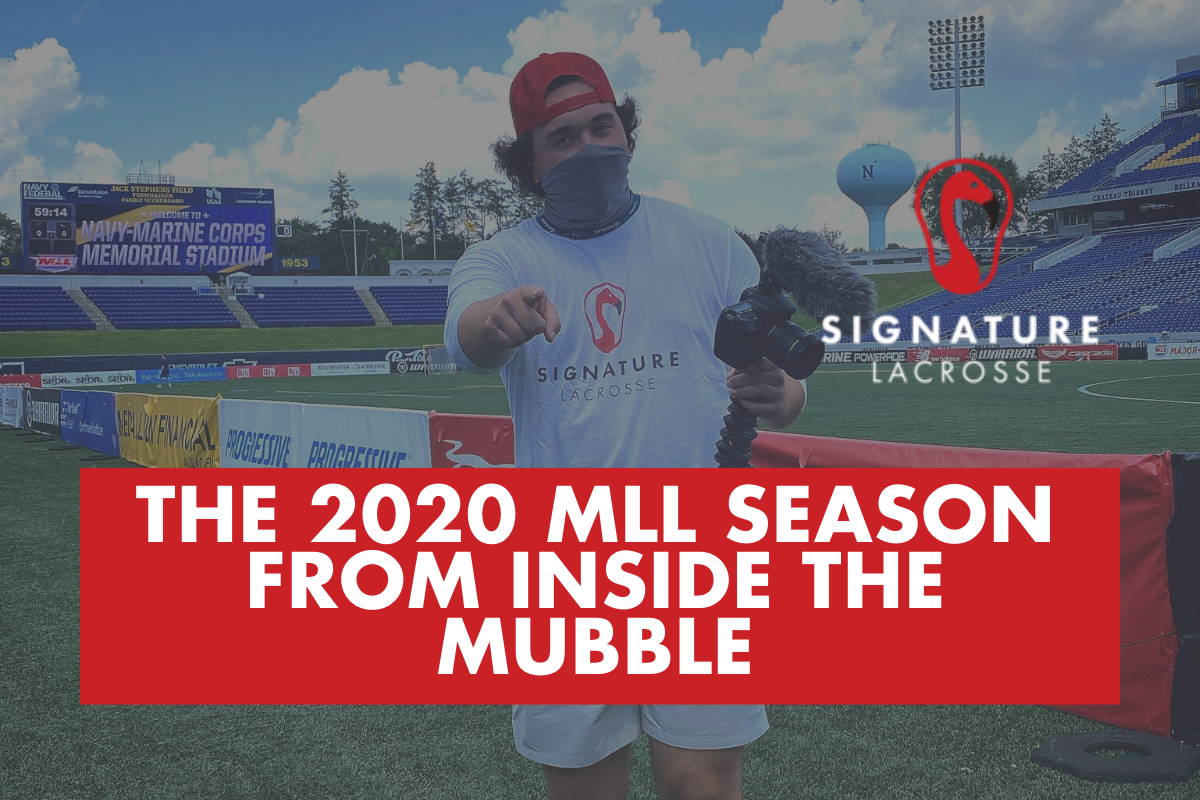 Having spent the last week almost at the MLL Bubble, or as us insiders are calling it, "The Mubble," there have been a lot of questions the lacrosse community wanted me to answer. For this Flock Talk, I have compiled the best of them and will do my best to put life in The Mubble into perspective.

The 2020 MLL Season from Inside The Mubble

I was lucky enough to get an invite to the MLL 20th season that was held in Annapolis, Maryland this July. It was an unbelievable experience getting to watch the best lacrosse players in the world compete at the highest level, and it's all thanks to our awesome partner, the MLL. As the new official lacrosse ball of the MLL, the Signature Lacrosse Pro S1 made its debut this season; and our great friends at the MLL were kind enough to allow me to document some of the season and provide this content to you.

Sold out
Sold out

Why are lacrosse players in the MLL sailing the new Signature Lacrosse Pro S1? Is it the players or the lacrosse balls?

With the addition of the new Signature Lacrosse Pro S1 lacrosse balls, MLL lacrosse players are seeing a significant change in the way that the balls are flying. With the addition of the dimples on the ball, there is a cut in air resistance, hence the balls fly straighter and more accurately. This change took some time to adjust to, but the best lacrosse players in the world are ready for a new standard of lacrosse ball. As our Founder/CEO Dan Soviero told me, “These balls are designed for the shooters. Players can rip corners more accurately and quicker.”

I must also add that after having a ton of conversations with players, the overall feedback is incredibly positive; and they are really loving the "grippiness" that the balls are giving them.

What's up with the color of the Pro S1 Lacrosse balls?

Our all new Hyper Yellow color for the Signature Lacrosse Pro S1 has been proven to enhance the capability to view and visually track the lacrosse ball for both lacrosse players and spectators. The same idea is seen thousands of times a year in tennis matches across the world, with all different colors of courts.  Overall, the implementation of Signature's Hyper Yellow in the Pro S1 seems to be a total win-win for the fans and players.

Yes! These are some of the best young creators that I have ever had the opportunity to work with, and I have learned so much in just a few days. If you haven’t yet, make sure to check out the most recent vlog for some updates on the clips that they are producing. The league has taken a lot of time to enhance the media coming out of Annapolis, and it has been on point!

What is it like to be at a lacrosse game without any fans?

It has been incredibly interesting. Most of what I do for vlogs and getting out, is to communicate with fans, not having that as an option has pushed me to become more creative and try to think of alternative ways to show personality. However, it is certainly weird not hearing JoJo drumming at Outlaws games or seeing the kids running up and down the stands as they mess around with their friends. Not having that this summer will make next summer just that much more exciting though!

How hot is it actually?

It has actually been some of the hottest days I have ever experienced. By the end of halftime on Tuesday, I could feel the rubber on the bottom of my shoes just getting so hot. I think they said on the broadcast that it was about 140 degrees on the field, and I believe it. I spent just as much time in the media room as I did on the field.

Who did I have winning the MLL Championship?

I am pretty unbiased when it comes to choosing a team to root for, however, the Bayhawks have two of our Signature Pros on the team so I had to roll with the Flock here. Although, it would be wicked awesome to see John Grant Jr. pull off the win in his final season, an absolute legend of the game. Regardless, congrats to the Boston Cannons, your 2020 MLL Champions.

So there it is, my takeaways on your questions from these last few days at the Mubble. It was one of the best experiences I've had watching lacrosse and creating content, even thought it was missing the awesome fans of the MLL. Here's to next season, and hopefully watching the 2021 MLL championship with a bunch of you.